Hey anything goes BUT friendly not foey!!
Post Reply
6 posts • Page 1 of 1

It has been more than four decades since Star Trek’s pointy-eared Vulcan Mr Spock first explored the distant corners of the cosmos.

But at 79, actor Leonard Nimoy has decided his space travelling days are over and is beaming himself up from the flight deck of the U.S.S. Enterprise and into retirement.

Nimoy, one of the most recognisable and best loved characters from the sci-fi series that began in 1966, announced that he wanted to ‘get off the stage’ and give young actor Zachary Quinto a clear run at the role he took over for last year’s Star Trek movie.

Nimoy said: 'He’s a terrific actor, he looks the part, and it’s time to give him some space. And I’m very flattered the character will continue.

He is also withdrawing from the sci-fi convention circuit, where he has for years been a big attraction among Star Trek devotees.

'I’m so grateful to the fans. I call these kind of experiences a victory lap... It’s like having a family reunion,' he said.

Nimoy said he was giving up acting altogether, but only after one final voyage home to Vulcan - the small Canadian town that has adopted the actor as an honorary citizen.

‘I’ve been doing this professionally for 60 years,’ he said.

‘I love the idea of going out on a positive note. I’ve had a great, great time.’

Nimoy has made an estimated £29million fortune from playing Spock in the long-running TV series and seven Star Trek movies.

As well as appearing at numerous conventions of Trekkies - the show’s fans who dress as their favourite characters and even have their own language, Vulcan, in honour of their hero.

‘Since Star Trek began, I’ve never had to worry about where the next job was,’ said Nimoy, who enjoyed a successful career in television and films before the ground-breaking space series began.

Nimoy revived his own love affair with the Star Trek franchise after a dark period in the 1970s in which he feared being typecast and attempted to distance himself from the role that made him famous.

His 1975 autobiography was called I Am Not Spock.

After resolving what he describes as ‘a definite identity crisis’, Nimoy re-released his autobiography in 1995, and renamed it, I Am Spock.’

Quinto is scheduled to appear in the sequel to the re-booted Star Trek franchise in 2012.

http://www.dailymail.co.uk/tvshowbiz/ar ... tires.html
'' It's not who I am underneath, but what I do that defines me ''
Top

they just seem to shrug off all previous such associations 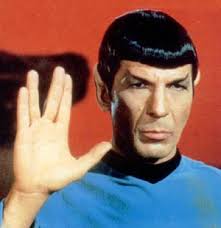 We come in peace - shoot to kill.

I aint no pleb
Top

they just seem to shrug off all previous such associations

There has been TV shows and DVD's with the Cast members talking about their careers on Star Trek, Shatner and Nimoy did one where they sat at a table and talked about it all.
'' It's not who I am underneath, but what I do that defines me ''
Top
Post Reply
6 posts • Page 1 of 1

Return to “OFF TOPIC”